Arguably the father of golf instruction for golfers of all abilities, Ben Hogan, with ample help from writer Herbert Warren Wind and illustrator Anthony Ravielli, published Ben Hogan’s Five Lessons: The Modern Fundamentals of Golf in 1957. Little did he know that Five Lessons would become a classic and sit atop a vast mountain of instructional literature for more than a half century.

In the opening chapter, Hogan writes, “The greatest pleasure [in golf]is obtained by improving.” The golf legend with nine majors has high aspirations for the common golfer.

“I truly believe this: THE AVERAGE GOLFER IS ENTIRELY CAPABLE OF BUILDING A REPEATING SWING AND BREAKING 80, if he learns to perform a small number of correct movements and conversely, it follows, eliminate a lot of movements which tend to keep the swing from repeating.”

The all caps were Hogan’s. He is, in essence, shouting this positive message and, throughout the book, imploring golfers to work on and master the five lessons: 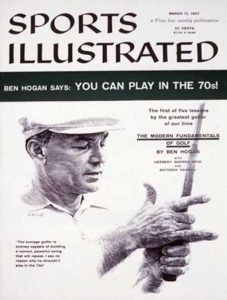 The book was born after Sports Illustrated published Hogan’s lessons as articles. They were wildly popular with readers.

“It was the first golf serial Sports Illustrated ever ran,” Bill Scheft told me.

Scheft is the nephew of Herbert Warren Wind, Hogan’s collaborator and considered to be the dean of American golf writers. (Scheft himself was a Sports Illustrated columnist and a longtime staff writer for David Letterman.)

“[Sports Illustrated] thought it was a big risk,” Scheft added. “The first issue came out on Wednesday, and when the editors came in for the Sunday meeting all they talked about was how everyone at their driving range on Saturday had a copy of the magazine at their feet. Every one of them. That’s when they knew they had a hit.”

Ravielli’s drawings captivated Hogan and soon after the public. The book took off like a Hogan 1-iron.

“Whenever anyone brought it up, Herb would dismiss his contribution,” Scheft said, “[saying]Hogan was helpful and generous with his time, but [Herb] would insist Ravielli’s drawings are what launched the book and are responsible for its success.”

Five Lessons has never been out of print. Happy anniversary to the most popular and enduring book on golf instruction.