Trending
You are at:Home»Fun Facts»California Man Records 10,000th Round and Reflects on His Long ‘Love Affair’ with Golf
By Neil Sagebiel on March 16, 2018 Fun Facts, News

Bob Roth has played more golf than any living person on the planet. That’s what his son, Jeff, said, and I can’t imagine who would argue with him. 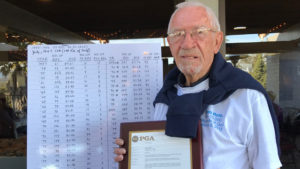 On March 8, at Saticoy Country Club in Somis, California, the elder Roth completed round No. 10,000. The 86-year-old former insurance salesman who lives in nearby Moorpark shot a 96. He was surrounded by family and friends on hand to celebrate the milestone. By the way, those were all 18-hole rounds. Bob has never counted 9-hole rounds or playing par-3 golf courses.

“I maintain that no human has played more golf,” Jeff, a PGA professional, said at PGA.com. “Should someone argue that Gary Player has played more rounds than my dad, I say, OK, that’s nice. Please prove it.”

“It’s a love affair,” Bob said. “The passion has been there to keep playing and enjoying the game.  I’d like to see more young people taking up the game and putting down their hand-held tech devices.”

Born and raised in the Midwest, Bob Roth played his first round in the spring of 1947 (71 years ago) when he was 15. He shot a 128 at Newcastle Country Club in Pennsylvania. (He still has the scorecard.) Since then Bob has recorded rounds at 513 more golf courses.

Roth was an exceptional athlete, receiving both a basketball and baseball scholarship to Arizona State University after a stint in the Air Force, but ultimately golf became his passion after his brother-in-law gave him a set of clubs. Bob was self-taught, his wife explained. He read golf instruction books and picked up tips from his brother-in-law and friends.

“I’ve been blessed to have not had real serious health issues,” Bob said about his golf longevity, although he did have knee replacement surgery in 1994. Obviously, that didn’t slow him down too much.

Now in his 80s, Bob Roth made it to 10,000 rounds by playing four times a week at Saticoy Country Club. The recent 96 brought his stroke total to 836,891. Yes, Bob has also kept track of that since the beginning more than seven decades ago.