Michael Jordan’s love of golf is no secret, and unfortunately, neither is Charles Barkley’s golf swing.

You’ll be hard pressed to find a pitcher in the MLB, past and present, who doesn’t swing the sticks on their off days. Hockey players seem to have an innate ability to pick up the game of golf, and the history and marriage of the two ‘country club sports’, tennis and golf, is well documented.

In recent years we’ve seen a few pro athletes across sports try their luck at competitive tournament golf to little or no avail. Former NFL quarterback Tony Romo has seen his bids to qualify for the U.S. Open fall short at regional qualifiers in two consecutive years. At the same time, current NBA super star Stephen Curry has teed it up in the Ellie Mae Classic, a Web.com event, missing the cut by 11 and 13 strokes respectively.

Like MLB pitchers, another group of professional athletes that has a reputation for being particularly good golfers are NFL quarterbacks. As the second weekend of the NFL wraps up tonight on Monday Night Football, I thought it’d be fun to share a little bit of trivia that I was stumped with over the weekend by a Pro Golf Discount sales associate.

When I was compiling numbers for an upcoming review, the question asked was:

Who is the only former NFL player to win a professional golf event?

I’ll get to the answer in just a moment, but first, a little history.

Now, while most professional athletes have taken up golf as a hobby not many have pursued a competitive career in the game of golf.

Historically, Sam Byrd, a professional baseball player is this most successful pro athlete to transition to men’s professional golf. Byrd won 6 times on Tour between 1942 and 1945. He is also the only athlete to compete in both the World Series and the Masters Tournament.

Babe Didrickson Zaharias, an All-American basketball player and three-time track and field Olympic medalist is hands down the most successful professional athlete to turn to professional golf, period. During her LPGA career, she racked up 41 victories, including 10 major championships. She was the LPGA’s first super star.

Babe Didrikson Zaharias earned 2 gold medals and 1 silver medal during the 1932 Los Angeles Olympics for the US Track and Field team. She also racked up 41 victories, including 10 majors on the LPGA Tour.

Althea Gibson famously integrated both women’s professional tennis and the LPGA. She joined the LPGA because there was not a professional women’s tennis tour in the 1950s. She became the first black player to compete on the LPGA Tour.

Champion Boxer Joe Louis also played a pivotal role in integrating professional golf. While he never turned pro in golf, he did play in the 1952 San Diego Open on a sponsor’s exemption. This exemption was important because it removed an antiquated bylaw in the PGA’s charter that limited participation to only white golfers. His participation paved the way for other men of color to play golf professionally.

But what about the question? Which former NFL player has won a professional golf event?

The answer is John Brodie. Brodie was a multi-sport athlete, however he didn’t go pro in either baseball or basketball, the sports he initially went to Stanford to play. While there he transitioned into playing football and golf. Ultimately playing for 17 seasons in the NFL as quarterback for the San Francisco 49ers before joining the Senior PGA in 1985. 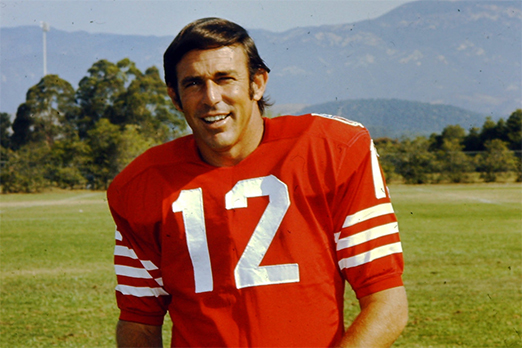 Brodie played in the 1959 and 1981 U.S. Opens, failing to make the cut in either attempt. His lone victory came in 1991 at the Security Pacific Senior Classic, out dueling Chi Chi Rodriguez and George Archer, birdying the first hole in the playoff.