Trending
You are at:Home»Fun Facts»Rickie Fowler Said Aloha from Head to Toe
By Neil Sagebiel on January 11, 2018 Fun Facts, The Pros

Rickie Fowler has never shied away from making a fashion statement. That was certainly true last week at the Sentry Tournament of Champions in Maui, Hawaii. 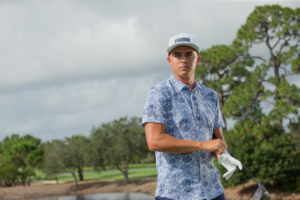 “[T]hursday’s choice at Kapalua was bold—even for him,” wrote Rex Hoggard at GolfChannel.com. “Fowler teed off … in an island-inspired, flower-print shirt that he wore untucked. That may not sound cutting edge here on the shores of the Pacific Ocean but is very much venturesome within the often-stoic confines of professional golf.”

The Carlsbad, California-based company introduced the Aloha Collection as a head-to-toe Hawaiian-themed assortment that includes shirts, shorts, golf shoes, a cap and even a golf tee.

“Rickie talks about his grandfather’s Japanese heritage, which inspired the concept for this collection, blending the best of Hawaii with traditional Japanese prints,” said PUMA Golf’s Kristin Hinze in a company statement.

The relaxed look and style translated well on the Plantation Course at Kapalua. Fowler finished in a tie for fourth at 14-under par (69, 71, 68, 70).

“I’ve always been different,” he said about his fashion choices at the tournament. “I don’t want to go straight down the middle of the fairway. I like to skirt into the rough a little bit but at the same time obviously still be respectable.”

The PGA Tour remains in Hawaii this week for the Sony Open. Justin Thomas and Jordan Spieth headline the field.