Trending
You are at:Home»Fun Facts»Slow Play Is Killing Golf And A Solution To The Problem
By Bob Gomavitz on March 31, 2015 Fun Facts

Today I would like to talk about something that makes me want to scream at people on the golf course. Yes, you guessed it from the title: Slow Play. It is a plague on the great game of golf. First off, none of us are playing for our livelihood or mortgage payments. We are basically playing for the sheer joy of the game. That being said: Why can we not finish a round of golf in less than 4 hours? One of the things that I think has slowed down play has been watching the pros play golf on TV, average players then hit the course and try to emulate them. I believe that this is a major contributing factor to slow play. The other culprit is that many times I see people just simply not ready to play when it is their turn. When it is your turn you should be over your ball and ready to strike, not pulling your club or determining the yardage or deciding on the type if shot to play. When it is your turn to hit you should be ready to hit and getting quickly into your pre-shot routine, if you have one.

Why do I mention this and why is it so important? I did a little analysis of what it takes to play a round of golf in 4 hours. A 4 hour round equates to approximately 13.33 minutes per hole. With 4 players, that means you have 3 minutes and 20 seconds to play each shot for each hole, that’s not a lot of time if you are walking, but if you take 20-30 seconds to set up your shot, that leaves you 2 minutes and 45 seconds to locate and walk to your ball. It’s also going to take more time to walk to your drive than your second shot to the green so things average out a bit there. 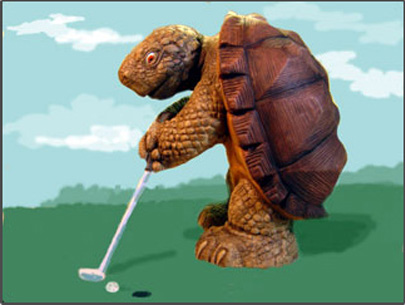 Let’s take an average par 4. Wikipedia claims average walking speed is about 3.1 mph. However, golfers are carrying or pushing a cart full of golf clubs so let’s cut that down by 20%. We are now at an average speed of 2.5mph, and if you do some quick math that comes out to about .82 seconds to traverse a yard. So now for some more math: For the sake of argument, we’ll use 250 yards as a drive distance and 150 yards as an approach shot. If it takes .82 seconds to walk a yard then it will take 3.4 min to get to your drive. If you have 3:20 per shot per hole, then you are already behind, but you get to make up some time as the second shot will only take you 2:03 to get to the green. Allowing 30 seconds for a pre-shot routine, club selection, etc., we have spent 6:23 of our allotted 13:20, which gives us 7 min to get the ball from on or around the green into the hole. In my mind, that seems entirely reasonable, so why does it not happen and why do we take so long on the green? I have come to the realization that we could speed up play on and around the greens if we made one simple change: Leave the pin in the cup until you are close, let’s say within 20 feet.

One thing I notice time and time again is that someone is on the green and ready to lag their putt to the hole, but they are waiting for someone to chip up or hit a bunker shot or some other short game pitch. The time that is spent waiting could be used to speed up play, and when you look at the numbers, the numbers don’t lie. I think you’ll agree this is something that amatuer golfers could really utilize in order to speed up play.

Below is an analysis of how long it takes to play an average round of golf. We’ll start with our goal of a 4 hour round, and add time as needed in order to demonstrate the major differences:

As you can plainly see, it would not take much to get onto that 4 hour pace and I believe it would be great for the game and make it much more enjoyable for all of us.

As for our main time saving idea: The idea of not removing the stick is going back to how the game was played for many years. Up until 1968, the flag remained in the cup and the player was allowed to put without removing the flag stick, and no penalty was attached should the ball strike the stick if the pin was unattended. Below is a short history of the rule for those of you who care.

The Flagstick (A short history of the rule):

First mention 1875, but certainly in use before then.

I believe that if we suspend the penalty for hitting the pin from the green (how often do you really hit the pin from 20+ feet anyway?) and allow players to putt up when the situation calls for it, pace of play would speed up. And although this will not fix everything, I think it could make up that 45 seconds per hole which equates out to 15 min for a round of 18 holes.

That’s the idea anyway. If you have any other ideas let’s hear them. If you want take this idea and run with it, I would be very interested to the results you’re able to achieve on the golf course.

Your comments and questions are always appreciated and I will try to get to all of them.