Dustin Johnson didn’t dwell on a missed cut at Carnoustie in the British Open. The world’s top-ranked golfer bounced back with a 23-under performance at Glen Abbey Golf Club to win the RBC Canadian Open, his third victory of the season and 19th title on the PGA Tour.

“Even after the missed cut last week, I felt like I was hitting it fine,” Johnson told the media. “I just did not score very well at Carnoustie at all. I didn’t putt good.”

DJ turned that around at Glen Abbey, where he shot rounds of 68, 66, 65 and 66 to win by three strokes over Whee Kim and Byeong Hun An. Keegan Bradley finished fourth at 19 under. 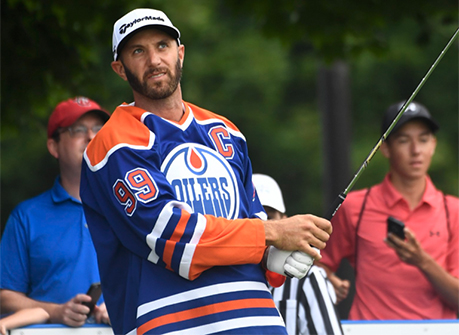 The rangy long hitter also had the Canadian fans on his side. The father of DJ’s fiancé is “The Great One,” hockey legend Wayne Gretzky from nearby Brantford, Ontario. Johnson heard loud cheers all across the golf course.

“Everyone’s been great,” he said. “I definitely feel like an honorary Canadian.”

(As reported by PGATOUR)

PGATOUR.COM reported: “The longest club in the bag was once again the difference for Johnson, who ranked second in the field in Strokes Gained: Off-the-tee (plus-7.540) with a TaylorMade M4 driver he’s been using on and off this season.”

Here’s a look at DJ’s setup at Glen Abbey. 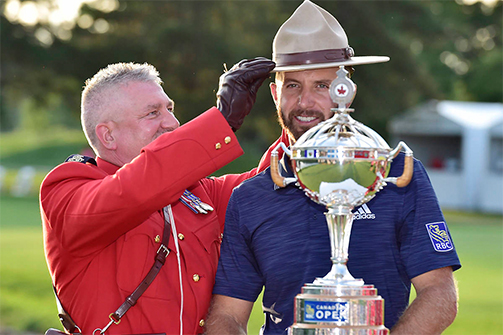 Dustin Johnson poses with the RBC Canadian Open trophy while an officer of the Royal Canadian Mounted Police offers him his hat.