Trending
You are at:Home»News»What’s In the Bag: Justin Rose Is Your 2018 FedEx Cup Champion
By Keith Schneider on September 25, 2018 News, The Pros

While the current FedEx Cup Playoff system is convoluted and will be replaced by a new controversial system next year, an electric excitement lit up the course at East Lake Golf & Country Club on Sunday.

Former world number one, Tiger Woods, thrilled the massive crowds who came to witness him win his first tournament in 1,876 days. But, Tiger’s wire to wire Tour Championship victory was not the only prize players had their eyes on.

The FedEx Cup was also settled on Sunday, and another player was fighting through the nerves and magnetic roars that seemed to be willing Tiger towards the complete sweep. Justin Rose, however, showed the world why he is the Number One golfer, birdieing 18 to secure the $10 million-dollar cherry on top of his season.

Rose has steadily built on his success in the 2016 Rio games and started the year with a win in China at the World Golf Challenge-HSBC Champions. Continuing his great form, Rose posted top ten finishes in five of his next six starts.

His second win of the season, the Fort Worth Invitational, preceded another run of top 10 finishes, this time in the Memorial, US Open and Open Championship. He tied for second at the Open behind Champion Golfer of the Year, Francesco Molinari.

The Tour schedule takes its toll on players and Rose was forced to withdraw from the WGC-Bridgestone due to back spasms. Along with a missed cut in the Northern Trust Open (his only missed cut all season), missing the one tournament was the only major negative from Rose’s season.

A tie for fourth in the Tour Championship secured Rose enough points to eclipse Bryson DeChambeau and hold off Tiger’s magnificent win. The second World Number 1 to win the FedEx Cup, Justin is also the 3rd European to claim the honor. 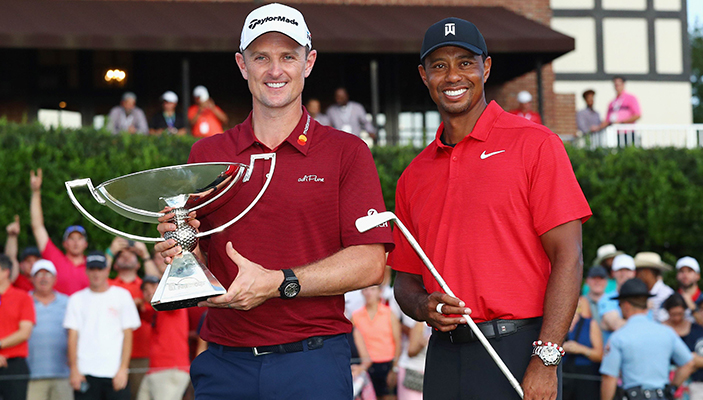 A staff player, Justin plays all TaylorMade clubs. Here are the clubs he used throughout the season to win the FedEx Cup Championship: