The Sea Island Resort in Sea Island, Georgia hosted the RSM Classic last week. A favorite home port among many players, they were ready to attack the Seaside and Plantation courses.

Some familiar faces were at the top of the leaderboard heading into the final day. Newly minted PGA Tour winner Cameron champ and his 330+ yard driving average lurked within striking distance, but ultimately finished a few shots off the pace. Webb Simpson, a perennial FedEx Cup contender, finished one shot back.

Though, at the end of 72 holes, the round on Sunday came down to the surprise tournament-leader Charles Howell III, and Patrick Rodgers, who after shooting back-to-back 70s on Thursday and Friday, fired 61-62 on the weekend to force a playoff with Howell.

It only took two extra holes to break the deadlock. Replaying 18 on both holes of the playoff, Charles Howell III birdied 18 the second time around to beat Patrick Rodgers.

Charles Howell III becomes the latest in a long line of players who are rediscovering some form akin to the earlier in their career. Howell made his debut on the PGA Tour in 1996 and has competed on Tour every single year since 2000. This is Howell’s third career victory, and first since 2007. 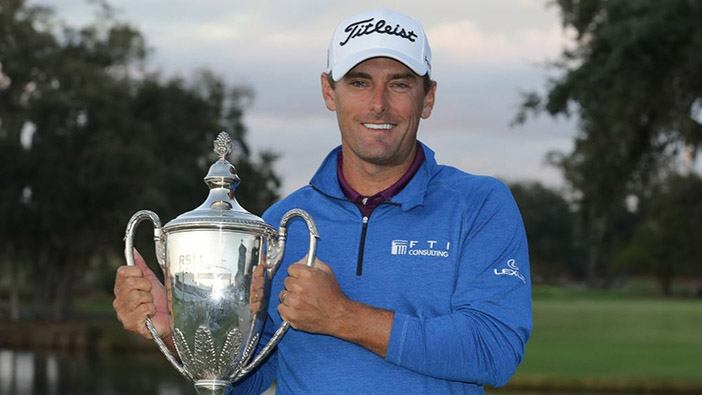 Francesco Molinari retained a very large lead in the Race to Dubai standings heading into the final event of the European Tour season, the DP World Tour Championship. Only one player, Tommy Fleetwood, could unseat him for the Race to Dubai title.

Tommy Fleetwood had one objective, win the DP World Tour Championship, or watch Molinari win the Race to Dubai title. Fleetwood had a nice week but did not play well enough to win in Dubai.

Englishman Danny Willett kept his focus narrow and laid his eyes on the only prize that was right in front of him. On Sunday, the 2016 Masters champion held off all challengers to win the DP World Tour Championship.

Tied with Patrick Reed atop the leaderboard to begin the final day, Willett seized on an early misstep by Reed to open an unexpected advantage. After Reed opened bogey-par, Danny carded a par on the opening hole and drained a lengthy, side-winding, downhill Eagle putt that instantly gave him a three-shot cushion in two holes.

The win is a solid victory for Willett. Many of the top players in the world played in this tournament.

Ariya Jutanugarn already locked up the season-long competitions heading into the CME Group Tour Championship, but that didn’t stop Lexi Thompson from putting a nice finish on a season she’s ready to put behind her.

There was an air of redemption for Thompson in winning the 2018 CME Group Tour Championship. She faltered late in the same tournament in 2017, losing the event on the 72nd hole on a 2-foot putt.

This season has also been one of frustration for the 23-year old. She will look to build in 2019 on the momentum of this win and see if she can do anything to slow down the dominance of the juggernaut, Ariya Jutanugarn.

One other tournament to note from the weekend, the Australian Open. Over the years, some of the better players have gone down under and competed in the Australia’s championship.

This year’s Australian open was won by Abraham Ancer. Born in McAllen, Texas, Ancer has dual-citizenship with Mexico. He is the first Mexican player to win the Australian Open.

This is Abraham’s second career victory overall. Keep an eye on him this year in the PGA Tour season. Growing up playing in the winds of Texas and Oklahoma has made him a very solid ball striker. Expect to see his name near the top of the leaderboard a lot.