The Hero World Challenge is a prestigious 18-man field featuring major winners, the top 11 available players from the Official World Golf Ranking, the defending champion, and exemptions for two players selected by the TGR foundation. This field is as elite in talent and stature as it is small in participants.

A trip to Albany Golf Course on New Providence Island in the Bahamas is a wonderful way to end the year for many of these players. The pro-am is an opportunity for a lucky few individuals to see these players with their guards down and really get a chance to interact in a reduced-pressure environment.

Notably missing from the event were double-major winner Brooks Koepka, and the 2018 Champion golfer of the year, Francesco Molinari. Though, their omissions are understandable. Both players embarked on grueling schedules this calendar year, appearing in tournaments across the globe.

Koepka’s absence added another bit of intrigue to the event. Justin Rose, sitting mere percentage points behind Brooks for the #1 spot on the OWGR, could retake the pinnacle ranking with a three-way tie for second or better. 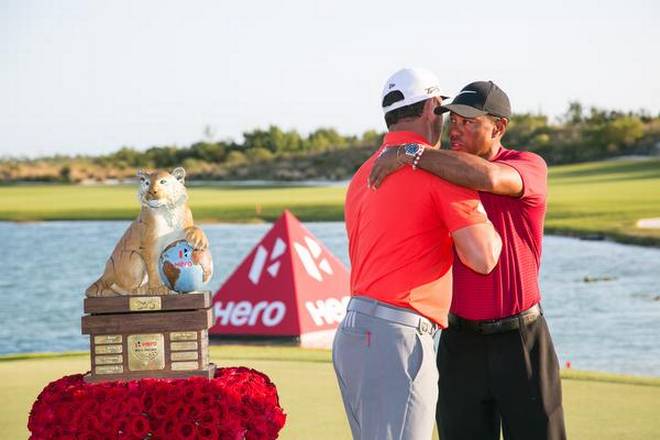 With no cut or FedEx Cup points available and a guaranteed payout of $100,000, this tournament is all about bragging rights.

After shooting a birdie-filled round of 7-under par, newcomer Patrick Cantlay shared a first round lead with Patrick Reed. The second round saw another first timer tied atop the leaderboard. Jon Rahm and Henrik Stenson both went low on Friday and finished the day at 10-under par for the tournament, 1 stroke ahead of Cantlay and Dustin Johnson.

The top of the leaderboard didn’t change too much on the weekend. Day three saw Rahm and Stenson continue to lead; however, a third player crashed their party at 13-under. With the final day pairings set, it would be Tony Finau and Jon Rahm in the final group.

What seemed like a possibility of extra holes at the start of the day turned into a windy-day ball striking clinic by Jon Rahm. After securing the lead on his own towards the end of the front nine, Rahm cruised to a 4-shot victory and his third title of the season.

That left only the matter of Justin Rose’s side-quest to retake the World Golf #1 ranking. Rose shot one of the lowest rounds of the day on Sunday, recording a 7-under 65 and a 15-under 273 for the tournament.

As the final pairing sauntered down the home stretch, it looked promising for Rose to capture the #1 ranking, but Tony Finau had other plans. Finau rolled in a 10-foot birdie putt to take sole possession of 2nd. Rose will have another opportunity to take over the World #1 ranking before the end of 2018 at the Indonesian Masters.

Down the stretch on Sunday Rahm kept his fiery disposition in check and played intelligent shots. One of TaylorMade’s top staffers, these are the clubs Jon Rahm used (and didn’t throw) en route to the 2018 Hero World Challenge victory.

What’s In The Bag: Jon Rahm (As reported by PGATOUR):