Trending
You are at:Home»Reviews»Book Review: Ben Hogan’s Five Lessons; The Modern Fundamentals of Golf
By Neil Sagebiel on August 31, 2018 Reviews 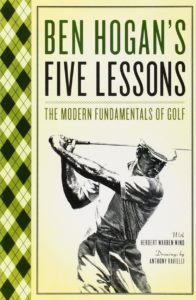 First published by A.S. Barnes and Company in 1957

Five Lessons is Ben Hogan’s gift to golfers of all skill levels. Hogan wants golfers to master the “modern fundamentals” so they can improve their golf swings, shoot better scores and increase their enjoyment of this maddening game. As Hogan says in Five Lessons, “The greatest pleasure is obtained by improving.”

The book was a follow-up to a popular series of articles on Hogan’s five lessons that appeared in Sports Illustrated in 1957.

Scheft is the nephew of Herbert Warren Wind, the famed golf writer who collaborated with Hogan on both the Sports Illustrated series and the book.

“The first issue came out on Wednesday,” Scheft said, “and when the editors came in for the Sunday meeting all they talked about was how everyone at their driving range on Saturday had a copy of the magazine at their feet. Every one of them. That’s when they knew they had a hit.”

The original article series can be found at Golf.com.

Each of the five lessons is a chapter in the book. The contents also includes a foreword, a preface and the opening chapter called “The Fundamentals.” The five lessons are:

“I do genuinely believe this,” Hogan says in the opening chapter. “THE AVERAGE GOLFER IS ENTIRELY CAPABLE OF BUILDING A REPEATING SWING AND BREAKING 80, if he learns to perform a small number of correct movements and conversely, it follows, eliminates a lot of movements which tend to keep the swing from repeating.”

A pause here to say the capital letters are Hogan’s. The all-caps device is used a lot in Five Lessons, as if the golf legend is raising his voice to make one important point after another, because, to Hogan, improving at golf is an important business. He wants readers to pay close attention.

“In these lessons we will certainly not be attempting to cover all of golf or even one-hundredth of that almost inexhaustible subject,” Hogan continues. “What we will be concerning ourselves with are the facts of golf which have proved themselves to be the true fundamentals—fundamentals that can be checked and not simply left to the imagination or to guesswork. This is all that is really needed.”

The 128 pages of text also include the detailed drawings of illustrator Anthony Ravielli. Those drawings coupled with Hogan’s modern fundamentals revolutionized golf instruction on the printed page.

The verdict on Five Lessons is as solid as Hogan’s famous 1-iron at the 1950 U.S. Open at Merion. It’s the bestselling golf instruction book of all time. More than 60 years after publication, Five Lessons is still selling at a rapid clip, momentarily ranked second in three sports and golf categories at Amazon.com.

There are at least a few reasons. Let’s start with the illustrations. Hogan loved Ravielli’s sketches and so did the public.

“Whenever anyone brought it up, [Wind] would dismiss his contribution,” Scheft said, “[saying]Hogan was helpful and generous with his time, but [Wind] would insist Ravielli’s drawings are what launched the book and are responsible for its success.”

“[T]he illustrations in the book are very effective and well done too,” commented one reader in his book review at Amazon.com. “I’m a visual learner, so that was important to me.”

The book also captures Hogan’s voice. It’s written in first person—Hogan talking directly to the reader. Five Lessons is a technical instructional text written in mostly conversational language. That’s hard to pull off, a tribute to the skill of Herbert Warren Wind. One can imagine the long hours Herb Wind spent with Ben Hogan, listening closely, scribbling notes, perhaps recording their conversations, as the legend talked about his favorite topic, the golf swing.

See if you can hear Hogan in this excerpt that begins on page 15:

“I realize that in some ways I can be a demanding man and that some things are harder for certain people to do than I may appreciate, but it really cuts me up to watch some golfer sweating over his shots on the practice tee, throwing away his energy to no constructive purpose, nine times out of 10 doing the same thing wrong he did years and years back when he first took up golf. This sort of golfer obviously loves the game or he wouldn’t be out there practicing it. I cannot watch him long. His frustration—all that fruitless expenditure of energy—really bothers me. If he stands out there on the practice tee till he’s 90, he’s not going to improve. He’s going to get worse and worse because he’s going to get his bad habits more and more deeply ingrained.”

In the end, the popularity and success of Five Lessons come down to Hogan himself. It’s widely held that no one in the modern history of the game owned his or her golf swing quite like Ben Hogan. And perhaps no golf great ever worked harder at the game.

Hogan was a late bloomer who fought a hook early on and failed in his first two tries on the PGA circuit. He didn’t win his first major, the 1946 PGA Championship, until the age of 34. He went on to win six of his nine majors after a car collision with a Greyhound bus that nearly killed him.

As Hogan says in the early pages, Five Lessons is the distillation of all he had learned since taking up the game at the age of 12. His methods have attracted a large following and helped countless golfers through the decades.

While I can’t say I learned to play golf from Five Lessons, I do know a lot about Hogan since I wrote a book that focused on him and Jack Fleck at the 1955 U.S. Open. It was a David vs. Goliath tale that detailed one of golf’s monumental upsets.

I talked to many old-time golf pros, some of them journeymen and some of them legends: Errie Ball, Tommy Bolt, Dow Finsterwald, Doug Ford, Fred Hawkins, Walker Inman Jr., Shelley Mayfield, Arnold Palmer and Bob Rosburg. At some point in our conversations, I said, “Tell me about Ben Hogan.”

“He was the greatest player I ever played with,” said Tommy Bolt, a Hall of Famer. “As a golfer, he could out-concentrate anyone else. He just overpowered them with concentration. That’s how he beat everybody. I thought Nicklaus was a great player, but Hogan was just a little bit better than him.”

Bolt also recalled that Hogan was the only player he ever saw get a standing ovation on the practice tee.

“Hogan was my idol,” Fleck told me on several occasions. As a teen, Fleck studied Hogan in the sports pages. As a young pro, he watched Hogan practice on the winter tour in the 1940s, ducking behind trees near the fairways to escape Hogan’s notice.

“He was like a machine,” Mayfield said. A tour and club pro, Mayfield played a lot of golf with Hogan in Dallas and Fort Worth during the 1960s. The two men became friends. “I have never seen anybody better than Ben Hogan from tee to green.”

How fortunate that Hogan decided to share his ballstriking fundamentals with mere golf mortals.

Five Lessons has never been out of print and probably never will be as long as golfers are trying to hit the ball where they want it to go—something Ben Hogan did as well as anybody in the 20th century.

About the Authors and Illustrator

Ben Hogan won 64 tournaments on the PGA Tour and nine major championships, including four U.S. Opens, a record that he shares with Willie Anderson, Bobby Jones and Jack Nicklaus. He is one of five players to win all four major championships. Hogan was inducted into the World Golf Hall of Fame in 1974. His first book was Power Golf, published in 1948.

Herbert Warren Wind has been called “golf’s poet laureate.” Wind wrote for Sports Illustrated and The New Yorker, and authored several books about golf. While covering the Masters in 1958, Wind coined “Amen Corner,” the famous three-hole stretch of 11, 12 and 13 at Augusta National Golf Club. Wind was inducted into the World Golf Hall of Fame in 2008. The annual book award given by the United States Golf Association is named after Wind.

Anthony Ravielli was a portrait painter turned illustrator who worked in advertising and publishing. Ravielli’s illustrations appeared in more than 100 books.