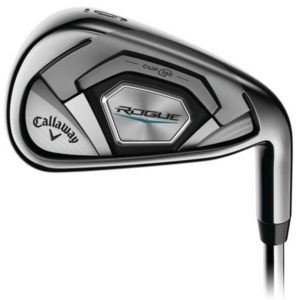 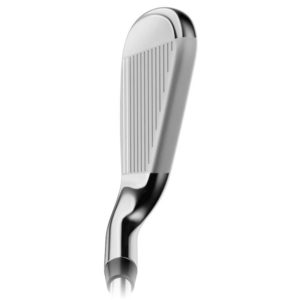 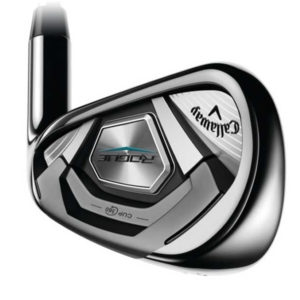 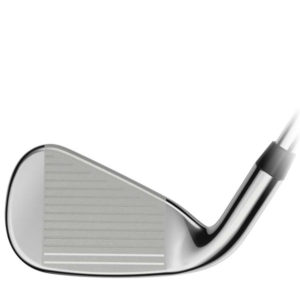 The Callaway Rogue irons feature an all-new 360 Face Cup with Variable Face Thickness and proprietary Urethane Microspheres that Callaway says delivers the best combination of distance, accuracy and playability. To optimize flight and control a tungsten-infused MIM’d Internal Standing Wave gave Callaway’s engineers precise control over the location of the CG. The Urethane Microspheres dampen vibrations on the thin, fast face and improve sound and feel without sacrificing COR and ball speed.

The Callaway Rogue irons have a game improvement iron shape suited for players with moderate to slow swing speeds. 12 to 26 handicaps.

For a game improvement iron with a thick top line and wider sole the Callaway Rogue irons had a decent amount of workability and quite a bit of forgiveness. Shots struck off the heel and toe produced had minimal distance loss. Though, considering the Rogue family is built around distance I found the standard Rogue irons long, but nothing out of the ordinary. The Urethane Microspheres reduce some of the clicky sound and feel of a hollow game improvement iron and gives these a pretty smooth feel through impact.

The Callaway Rogue irons are nowhere near as aggressive or masculine looking as the Epic irons, but the technology-rich irons produce big results in a subdued package. The Rogue irons are a great alternative to the pricier Epic irons. 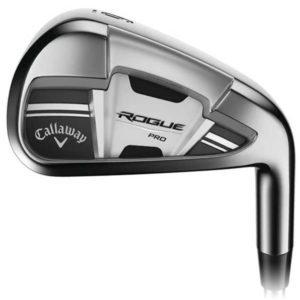 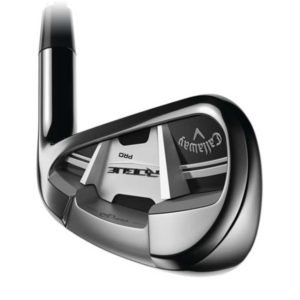 Lower handicap players can go Rogue, too. The Callaway Rogue Pro iron has the same technologies as the standard Rogue iron, but in a compact head with a thinner top line and sole, shallower cavity and minimal offset that caters to the needs of better players.

The Callaway Rogue Pro irons are for better players who still want a fair amount of forgiveness in their irons. The lighter XP 105 shaft will suit a lot of players by reducing the overall weight without sacrificing stability. 5 to 14 handicaps.

There is a lot to like about the Callaway Rogue Pro irons. To begin with the cosmetics are a lot more appealing than the standard Rogue and Rogue X irons and you’ll notice design elements present in the Epic Pro irons. The styling of the cavity, compact head size, thinner top line and narrower sole give this iron the look of a better players club. The urethane microspheres helped to reduce vibrations and the traditional click sound of a cavity-back iron, but there still was a hint of a click at impact. The feel, however, was fantastic and not hollow at all.

Compared to the Rogue and Rogue X irons, the Rogue Pro irons have the weakest lofts, but I didn’t notice a great reduction in distance from the distance-based Rogue irons (the Rogue X irons were at least a full club longer). I liked the ball flight produced from this head in combination with the XP 105 shaft, they launched easily and the peak height was in line with what I typically see from a 7 iron.

Improving players out there, listen up! In general, the amount of technology in a player’s irons lessens as their skill increases. Manufacturers have begun to adjust the weighting and move the CG of players irons, but for the most part have left their big tech in their game improvement offerings. The Rogue Pro irons bridge this gap with ease giving players a ton of forgiveness for the size of the head. 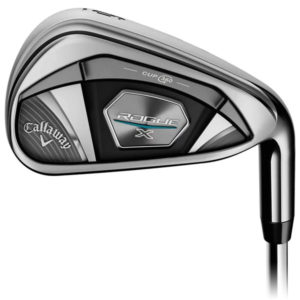 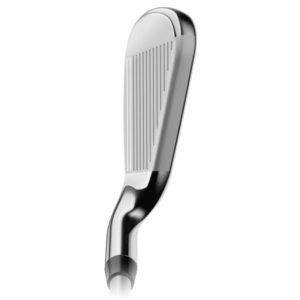 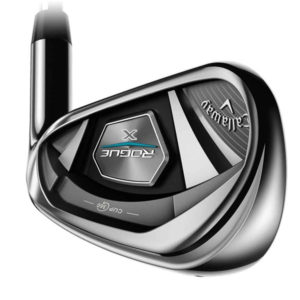 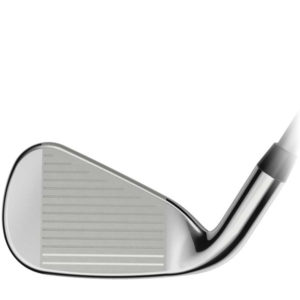 The Callaway Rogue X iron is packed with the same technology found in the regular Rogue irons. In addition, the Radical Distance Tech Package consists of lighter, longer shafts and stronger lofts. A wider sole drops the CG lower and deeper for an easy, high launch and long carry.

The Callaway Rogue X irons are pure distance irons aimed at players with mid to slower swing speeds. 16 to 36 handicaps.

First off, this is not a 7 iron, it is a rocket launcher disguised as a golf club. Compared to the X Forged irons the Callaway Rogue X irons are about 1.5 clubs longer. Even so, the ball flight didn’t seem to be any higher than usual, it just hung in the air forever. The Rogue X irons have a noticeable offset, thick top line and sole, but a better feel and sound than many game improvement irons due to the Urethane Mircospheres in the cavity.

The styling is a bit understated holding true to the Rogue theme. Only a simple accent of teal on the badge adds color beyond chrome and black. The thin face is extremely hot and has a lot of room to flex creating fast ball speeds across the face, off-center hits had a minimal loss of distance and ball speed. If you want a forgiving distance iron with lighter shafts packed with the latest tech, get to your local range and give the Callaway Rogue X irons a try.

One thing to note, be prepared to relearn all your distances, including making adjustments to your wedges. It may be necessary to either strengthen the lofts on your wedges or purchase new wedges based on the new distances of your irons.