Trending
You are at:Home»The Pros»Masters Champion Jordan Spieth: WITB
By Duffer on April 23, 2015 The Pros

Remember back to when you were 21, do you know what you were doing? Legally enjoying a few brews on the course? Finishing up college? I’ll tell you something you most likely weren’t doing, playing in the Masters. And, unless your name is Tiger Woods or Jordan Spieth, winning “A Tradition Unlike Any Other” was not part of your year’s accomplishments.

In a historic run, Jordan Spieth became the second youngest player to don the Green Jacket. Bogeying the 72nd hole, Jordan’s final score 270 (-18) tied the previous 72 hole record set by, you guessed it, Tiger Woods. Jordan is the first player since Raymond Floyd in 1976 to go wire-to-wire. Here are some more record breaking stats from his historic run:

Jordan’s game has vaulted him to the #2 world ranking, and his current form is leaving the rest of the field in his dust. The PGA Tour is on notice, Jordan Spieth is a force to be reckoned with. Here is how he has finished when teeing it up in the 2014-2015 season: 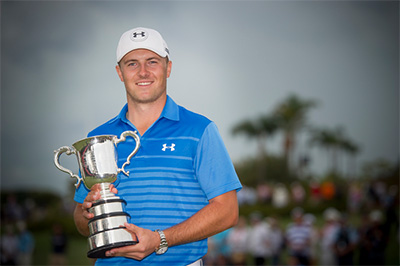 So how is Jordan on such a monstrous run? Is he corking his clubs like Sammy Sosa’s bat? Is he playing top secret clubs with space age technology? No. Something that makes the sport of golf unique is that we as amateur players can play the same courses and use the same equipment as the pros. This is a fantastic, yet overly humbling fact of the game. There is nowhere to hide, or technology to point to that says, the pros have an advantage over us, duffers. Check out what Masters Champion Jordan Spieth had in his bag for his first major victory: