Instead of continuing on the M1 and M2 product lines, TaylorMade felt there were enough advancements in engineering and design to warrant donning the models the M3 and the M4. The M3 lineup has a 460cc and 440cc driver, fairway wood, rescue and iron set. The M4 lineup offers a little more versatility featuring a standard and draw biased driver, a standard and pro fairway wood, rescue, combo iron set and full iron set.

What do you get when you take carbon fiber clubhead construction elements and combine it with a radical departure from traditional driver-face design? The TaylorMade 2018 M3 and M4 Drivers. While a lot of great innovations were unveiled at the seminar, the major takeaway (as you no doubt guessed) was the re-imagination of the driver clubface through Twist Face Technology, and for TaylorMade, there’s no turning back.

The Bulger driver surpassed long-nose woods as the preferred club style around the 1880s, and driver clubfaces have been designed with the same bulge and roll technique since. A bulge and roll clubface creates gear effect. The simplest way to describe gear effect is that when the clubface opens it produces draw spin and vice versa.

Engineers test clubs using robotic arms because in doing so they can control for the greatest variable in the entire swing, the player. No matter what happens in the takeaway and downswing robots can always return the clubface to square at impact. The result is that since the clubface always returns to square the gear effect brings shots hit by robot arms back to the target line without crossing over. Humans, however, are not so precise and do not return the clubface square to the target at impact every single time they swing.

By twisting the low heel and high toe TaylorMade was able to alter the gear effect a driver with a traditional bulge and roll face produces and align human mishits with the robot swings, bringing the ball back to the target line, but not crossing over. (Be sure to check out the M Family driver pages for the in-person interview our correspondent Justin Morrison did with Todd Beach for more great information on Twist Face technology) 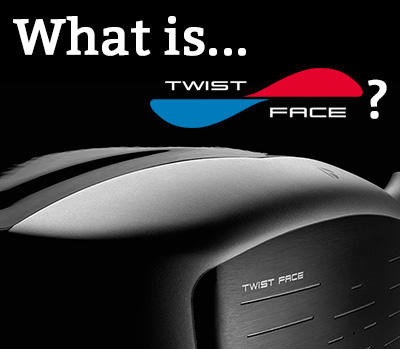 Enter Twist Face. TaylorMade’s R&D discovered vastly different results from human swings compared to labratory-controlled robot swings using the standard bulge and roll clubface. Robots can correct shots off the heel and toe producing a ball flight that brings the ball back to only a few yards off the target line. Humans, however, are not so consistent and tend to either snap-hook or push-slice shots off of the toe and heel respectively. After interpreting the data, TaylorMade decided to forego the standard bulge and roll clubface and designed the all new Twist Face technology. Twist Face technology is engineered to correct for those inherent swing tendencies in real time.