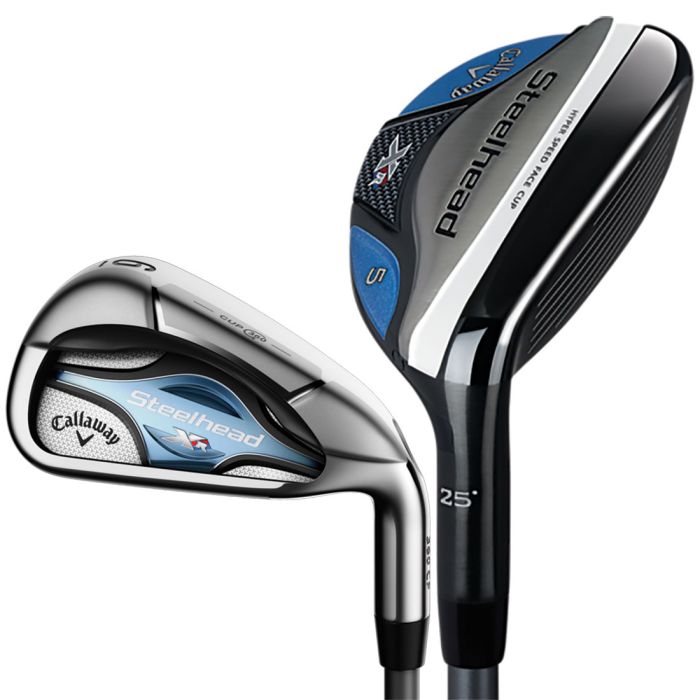 The Women's Steelhead XR Combo Irons deliver explosive performance with Callaway's most popular shape ever. The longer irons are built to launch higher for more carry and distance, and the scoring irons to launch lower for more control and accuracy. In all, the new Steelhead is packed with distance and built to score.
Manufacturer Direct
Custom Product
Out of stock
Only %1 left
SKU
P81202

The Women’s Steelhead XR Combo Irons have been designed specifically for women who want beautiful shaping and playability, more distance from the industry-leading 360 Face Cup, and more forgiveness with great feel.

Steelhead XR Irons combine the shaping and playability that made the Steelhead X-14 one of the most popular irons of all-time. Their explosive power come from industry-leading, next-generation 360 Face Cup™ technology that increases ball speed with greater efficiency on both center hits and mis-hits for more distance on every swing.

In the irons, a bar of steel-infused soft urethane positioned behind the lower portion of the face serves two functions; Absorbs unwanted vibration for great feel, and adds weight, which lowers the head’s Center of Gravity for faster ball speed on low hits and higher launch characteristics.

Steelhead XR Hybrids have a refined head shape which maximizes forgiveness by creating a slightly deeper body and longer blade length for a larger hitting area and higher MOI.

The irons have a hollow Bore-Thru hosel design which saves significant weight that’s repositioned in strategic places in the head to create more forgiveness and easier launch.

In the irons, the CG is positioned strategically in each iron to promote easy launch and long carry in the long-irons, easy launch and keen control in the middle-irons, and lower and high-spinning shots in the short-irons.