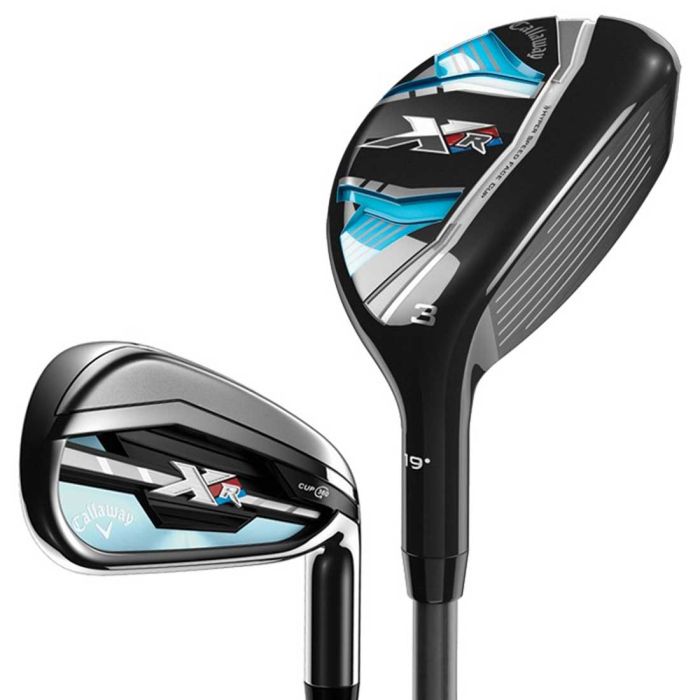 Re-designed hybrids and irons give players the best of both worlds with the Callaway Women's XR Combo Iron Set. Increased distance and forgiveness makes these some of the most advanced clubs on the market.
Manufacturer Direct
Custom Product
Out of stock
Only %1 left
SKU
P72538

The Women's XR Irons by Callaway are built for speed. Callaway has taken the Cup 360 that’s redefined ball speed in fairway woods and brought it to irons. The improved Cup 360 acts like a spring on shots hit low on the face, and increases ball speeds everywhere else on the face too. When you factor in the lower CG, all that forgiveness, the face flex of the Internal Standing Wave, along with the precise 2-piece, dual heat construction you can see why these irons are a must have.

Callaway changed our their whole approach with the new Women's XR Hybrids, making a hybrid that’s easier to hit and longer. From the ground up, Callaway developed a completely new Forged Hyper Speed Face Cup that increases ball speed for much greater distance and forgiveness.

Increased Ball Speed For Greater Distance:
The next generation of our Forged Hyper Speed Face Cup increases ball speed all across the face so you get distance and forgiveness at every impact location, even on off center hits.

Higher MOI and Lower CG In A Hybrid:
We’ve completely redesigned the head shape to reposition weight. This creates even more forgiveness and a CG that’s 46% lower than X2 Hot.

More MOI and Ball Speed:
Our re-engineered Internal Standing Wave is the ultimate team player. It’s a refined way to increase MOI and still give the face cup the freedom to flex for more ball speed.