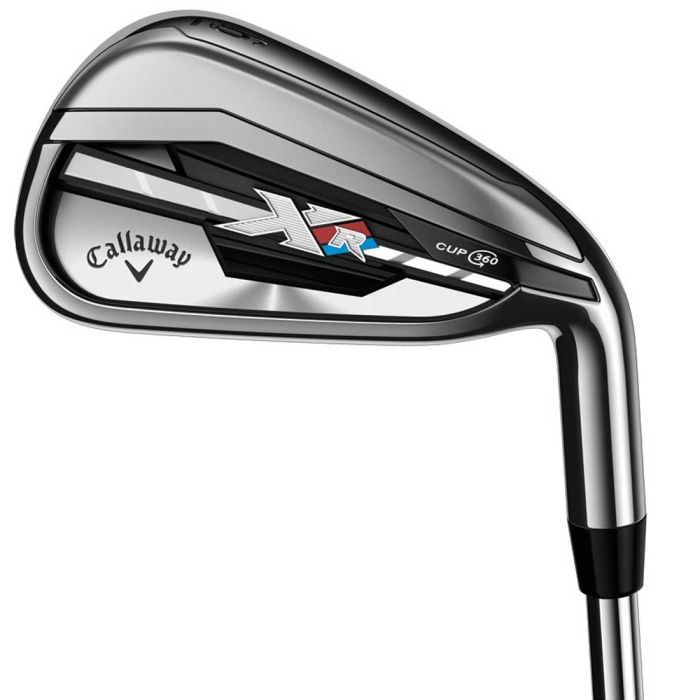 The distance on these irons is incredible, and that’s just the start. When you factor in the lower CG, all that forgiveness, the face flex of the Internal Standing Wave, along with the precise 2-piece, dual heat construction you can see why these irons are a must have.
Manufacturer Direct
Custom Product
Out of stock
Only %1 left
SKU
P72517

The XR Irons by Callaway are built for speed. Callaway has taken the Cup 360 that redefined ball speed in fairway woods and brought it to irons. The improved Cup 360 acts like a spring on shots hit low on the face, and increases ball speeds everywhere else on the face too.

The distance on these irons is incredible, and that’s just the start. When you factor in the lower CG, all that forgiveness, the face flex of the Internal Standing Wave, along with the precise 2-piece, dual heat construction you can see why these irons are a must have.

The XR is Callaway’s first Cavity Back Iron with 360 Cup Face technology, which increases ball speed across the entire face. They also included an Internal Standing Wave, which offers a lower CG, increased MOI, and gives the face cup freedom to provide better ball speeds along with a 2 piece construction.

The XR version is the Game Improvement version, featuring a larger head, more offset, a very thick top line, and a very high toe shape. The polished finish includes two white face grooves to help with alignment. Forgiveness-wise is about the same as the Pro, but you have a larger face area for your mishits. Due to the larger cavity, the slight “click” noise at impact intensifies ever so much compared to the Pro version. The ball flight was very good but had a slightly straight to left tendency for me with the increase of offset. If the Pro version is not producing enough forgiveness, this version would be the choice.