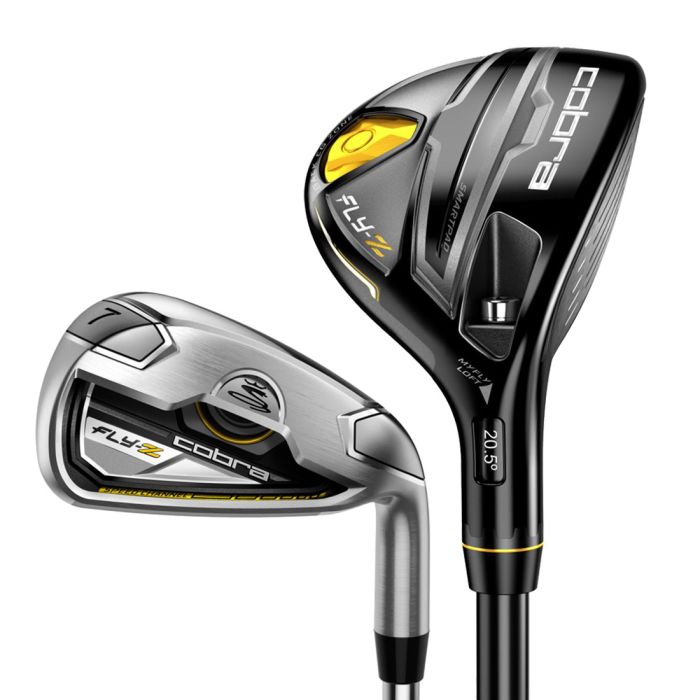 The Fly-Z combo set features all-new Fly-Z irons that generate faster ball speeds for more distance, and adjustable hybrids with loft settings that deliver long-game distance gapping of over 10 yards. Take on every shot from the fairway with confidence.
Manufacturer Direct
Custom Product
Out of stock
Only %1 left
SKU
P69058

The Cobra Fly-Z Combo Set features the Fly-Z irons and the Fly-Z hybrids. The irons are designed with a visible speed channel in the sole and behind the clubface to provide higher COR and rebound at impact, creating faster ball speeds and distance on shots struck across a wide area of the clubface. The hybrids are made to improve and optimize your long game by being fully adjustable and easy to hit. They feature Cobra’s Speed Channel Face, Forged E9 Zone Face Weighting and Crown Zone Weighting to deliver forgiveness while maximizing ball speed.

The new Speed Channel is an engineered trench that runs across the sole of the club and around the perimeter of the back cavity. It minimizes face thickness for a more pronounced flex and recovery on impact. This enhanced trampoline effect increases ball speeds across the face to deliver greater distance without sacrificing feel.

The Fly Z Speed Channel is an engineered trench running across the sole of the club and around the perimeter of the cavity back. It minimizes face thickness to increase distance and enhance the trampoline effect across the face without loss of feel. The Deep Perimeter Undercut, which is the deepest that Cobra offers, provides extreme distance on center hits, and consistent distance on mishits. To dampen vibrations and ensure greater feel, the large Thermoplastic Urethane insert is positioned right behind the sweet spot.

The Fly Z at first glance seems to have a whole lot going on. It looks quite busy to me, as the Thermoplastic Urethane insert can be clearly seen right in the center of the face. I must say though, it works! The club provided excellent feedback to my hands, had no cavity “click” noise at impact whatsoever, and felt solid shot after shot. The head size was smaller than some of the other Game Improvement heads, and offers a white bottom groove for alignment purposes. The ball flight was right on and the distance was average when considering the stronger 30.5° loft.