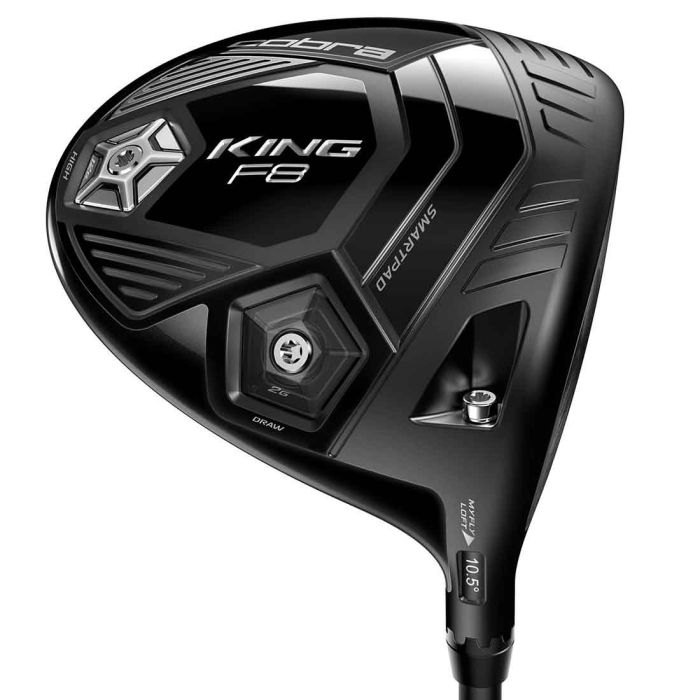 The Cobra King F8 Driver is the first CNC milled driver face paired with 360° Aero™ Technology. The F8 is Cobra’s smartest, fastest, most precise driver ever and features an oversized shape for maximum forgiveness.
Manufacturer Direct
Custom Product
Out of stock
Only %1 left
SKU
P88494

Unlike traditional drivers designed with a constant roll radius, Cobra’s innovative Dual Roll Technology utilizes different curvatures on the top and bottom of the face to optimize launch and spin for shots hit above or below face center.

Innovative Polymer Aero trips positioned around the perimeter of the clubhead improve drag reduction face-on through the downswing to generate maximum clubhead speed.

Powered by Arccos, Cobra Connect™ allows golfers to track their performance electronically to improve their game.

Back and Heel CG

Two weighs in the back and heel produce two very different ball flights to help tune your distance and trajectory under variable conditions.

The Cobra King F8 Driver incorporates and builds on many of the technologies from the Cobra King F7 Driver like the forged 8-11 Titanium E9 Face and Myfly 8 with Smart Pad. Cobra has also updated the Multi-Material TexTreme Carbon Fiber Crown from the King F7 Driver with the 5-ply Ultralight Carbon Fiber Crown. And, Cobra Connect is back again for 2018 after a resounding success in 2017; however, that is where the similarities stop. Cobra has unveiled a few major additions that are brand new to the King F8 Driver for 2018.

A CNC Milled face with a multi-directional pattern allowed Cobra to create the thinnest clubface possible, with a more precise thickness and a 10% reduction in weight compared to a hand-polished face. Dual Roll Technology optimizes trajectories on shots hit above or below face center by utilizing different curvatures on the top and bottom of the face. And, 360 Aero Technology is the addition of crown and sole aero trips that optimize aerodynamic performance for faster clubhead speeds and increased distance.

5 to 25 handicap golfers with moderate to higher swing speeds. Its oversized shape makes it ideal for those seeking a more forgiving profile and improved distance on mishits.

The first thing that jumps out about the new Cobra King F8 Driver has to be the CNC milled face. You really know where the sweet spot is with the circular milled pattern of the Sweet Zone, and this thing flat out goes when you hit it. In the standard setting, the Cobra F8 Driver produced a slight draw for me, which is ideal for my swing. The ball flight may be on the higher side for some people’s likings, but given the time to truly dial this adjustable driver in players should be able to easily find the optimal flight that fits their eye. Two weights (12g and 2g) in the heel and rear of the sole also give players the option to create a greater draw bias depending on which weight they put in the heel port.

The oversized shape gives the F8 driver a bit of a longer back end, but off-center hits still produced great ball speeds and distance during my testing. I enjoyed the all black club head, and the tighter carbon fiber inlay on the crown produces a wonderful sound when I flushed it. There is also a lighter grey option if you aren’t a big fan of the all black. All in all, if you are looking for added distance and forgiveness you are going to want to give the Cobra King F8 Driver a try. 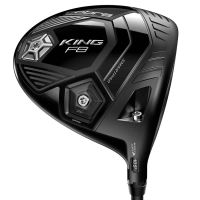