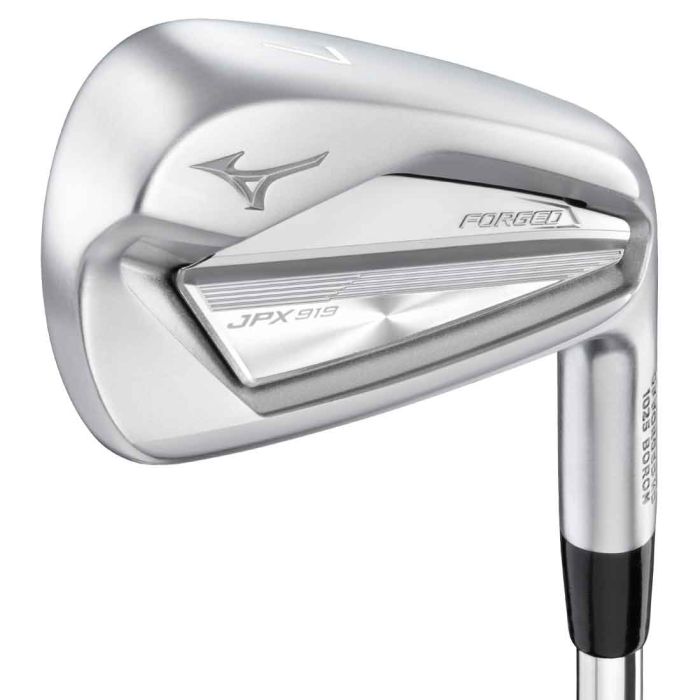 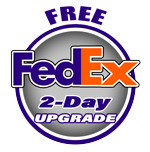 With a new back milled clubface, the JPX 919 Forged is Mizuno’s fastest ever forging in measured ball speed.
Manufacturer Direct
Custom Product
Out of stock
Only %1 left
SKU
P95477

Balanced with Mizuno’s trademark workability and elevated Grain Flow Forged HD feedback - the JPX 919 Forged is Mizuno’s most versatile iron. In the hands of a tour player searching for a distance equalizer, or an amateur wanting feedback to evolve their game - the streamlined JPX 919 Forged delivers on every level.

The ultimate balance of ball speed, stability and feedback within a more refined playing profile.

Open at the heel portion to enhance stability and launch, whilst producing a tour-preferred vibration/sound.

From a single billet of 1025E mild carbon steel in Hiroshima Japan for unmistakable Mizuno feel through impact.

The Mizuno JPX 919 lineup is built around the Stability Frame. A cavity back design where the heel is opened to optimize weight in the toe and perimeter, the JPX 919 irons have more forgiveness than the MP-18 irons.

While the JPX line is traditionally a Game Improvement class of club, there is a JPX 919 option for all players.

The Forged head is the most versatile version and with the added forgiveness from the floating badge on the back will fit the largest range of players. Better players can benefit from combining the Tour short irons with the Forged long irons. Forged heads are Grain Flow Forged HD from a single billet of 1025 Boron steel.

I decided to spend the on-course time focusing on the Tour and Forged heads. These are the two sets that fit my game best. The shafts on the JPX 919 Hot Metal irons were way too light for me, so I decided the best option was to hit a few shots at the range with the Hot Metal set to get an understanding of how they felt and look.

The footprint of the JPX 919 Forged heads isn’t too much larger than the Tour heads and most of the added bulk to the Stability Frame is still hidden by the thin top line at address. For someone who has played with a blade for the last 8 years, I didn’t mind the extra bit of forgiveness from the increased cavity and thinned face. In terms of feel and sound, they weren’t quite as smooth and crisp as the Tour heads, but they still rank as some of the best feeling cavity back irons I’ve hit.

The next day I decided to give the Tour heads another shot and I’m glad I did! Playing just one set of irons versus switching sets at the turn gave me a chance to focus on simply playing the game as versus the testing itself.

Right from the get-go I was on fire. I ran together a string of 4 birdies in a row in the middle of the front nine, taking dead aim at any and all pin locations. I missed an ace by no more than a foot on a 195-yard par 3, I was fully dialed in.

Having only played with the Tour heads for 9 holes, I was astonished at the level of confidence I had already gained with them. It got to the point during the middle of my round where I would walk up to my ball, look at the target, address the ball and swing. I knew exactly where these shots were going, every time.

The ball flight was right on point and while the standard shots stayed on a rope, if I really needed to turn the ball one way or the other I had no issue doing so. The only difference is that the movement was more controlled than with my MP blades. The Stability Frame gives these irons a stable feeling and one that seems to promote a repeatable swing.

At the end of this round, I took a look at my scorecard and saw I had shot one of the best rounds of my season. I attribute that score to the fact that the Mizuno JPX 919 Tour irons minimized the damage of my bad miss, which is a snap hook.

After the second round, I went to the range to hit the Forged irons a little bit more and get a feel for the JPX 919 Hot Metal irons. Both of these versions have stronger lofts than the traditional-lofted Tour heads, so I wasn’t surprised to see the ball really jump off the face of the JPX 919 Forged irons at the range. The utilization of the 1025 Boron metal allowed Mizuno to CNC mill out the back of the face higher up on the clubface to produce a thinner section with more spring to it.

The Hot Metal irons are as advertised, the ball definitely jumps off the face. The thing I was most impressed about with the Hot Metal irons was the amount of detail Mizuno put into them. Despite the incredible technology packed into the Mizuno JPX 919 Hot Metal irons, Mizuno managed to keep the impressive looks consistent from the Tour version through Hot Metal version......More 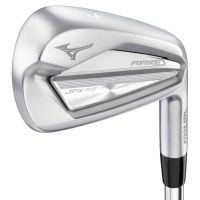