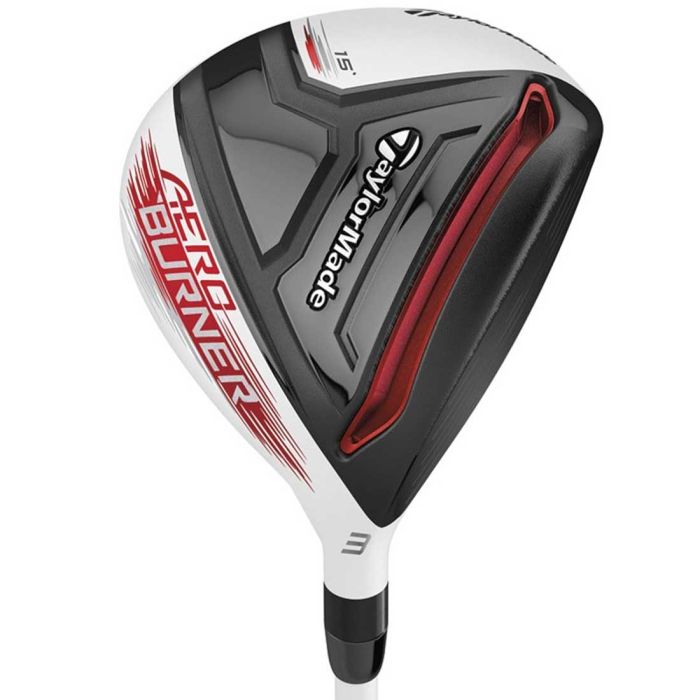 The original RocketBallz represented a breakthrough in performance which started a whole new replacement cycle for fairway woods. We have continued to pour research and development resources into better understanding the potential of flexible sole boundary conditions which has led us to AeroBurner, a fairway with our largest Speed Pocket ever. We are now achieving driver like launch conditions with a fairway wood. - Brian Bazzel, Senior Designer of Metalwood Product Creation
Manufacturer Direct
Custom Product
Out of stock
Only %1 left
SKU
P71719

Speed Pocket
The fairway’s biggest advancement is its new Speed Pocket which is twice as big as the JetSpeed (first driver to feature the technology). Unlike JetSpeed, AeroBurner fairways do not have loft sleeve technology which offers loft and lie adjustability. This allowed company engineers to extend the length of the Speed Pocket across the entire sole for maximum performance. In other words, this pocket increases the size of the sweet spot and reduces spin.
Strong Face
The AeroBurner 3 wood uses the highest strength face material - Ni-Co 300 Superalloy.
Shorter Shaft
The overall length of the shaft has been shortened from previous fairway offerings to increase its playability while maintaining while maintaining the speed from new head advancements.

Several aftermarket shafts and grips are available to customize your AeroBurner. Call golfdiscount.com at 1-800-394-4653 to place an order for a custom wood today!

The new Burner this year is called the AeroBurner and is built for speed. I tested the 15 degree version with the stock shaft offering. Looking down at the head, I found the head a bit on the narrow side from front to back when compared to most other fairway metals. Face depth was about average and a semi flat sole. With its flat white colorway and raised crown, it was very easy to frame the ball and line it up to my target though to me it sat a touch closed. Feel wise, I did not find this head as solid feeling as most for some reason unless it was hit dead flush and the sound was a bit harsh also when not hit perfect.

When Off The Tee the AeroBurner launched the ball even higher as one would think but again, not so high that it lost distance.

When I tried it off the deck (normal good lie) I found the AeroBurner elevated the ball quickly into a nice high flat launch.

I found the AeroBurner to be very easy even at 15 degrees to get the ball up and out of the rough quickly and cleanly, though I would suggest the 16.5 or 18 degree for deeper rough.

With it’s very light shaft, overall weight and slightly longer length, the AeroBurner is an excellent choice for those looking to gain some club head speed and or need help getting the ball airborne quickly.

This club was easy to hit, very forgiving and was very long. Only thing missing was adjustability and a better feel.