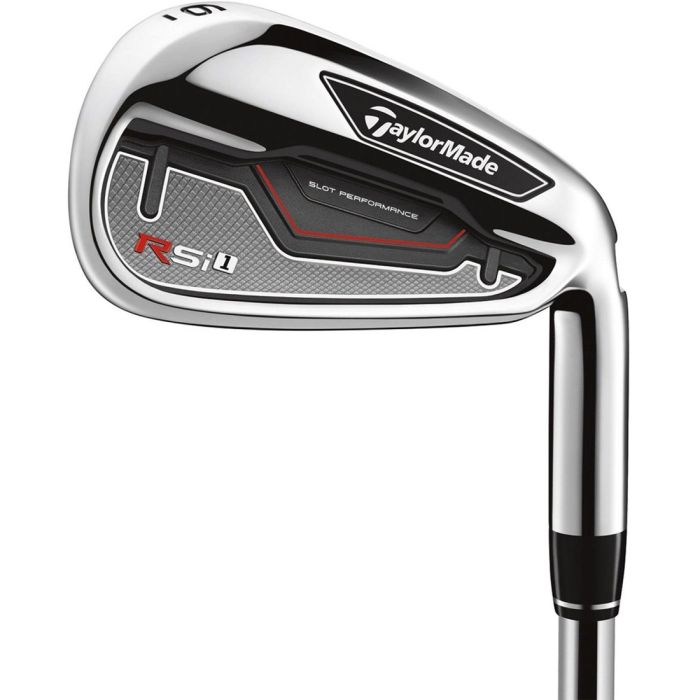 The RSi 1 Irons are the culmination of TaylorMade's quest to increase speed, enhance distance, and provide forgiveness.
Manufacturer Direct
Custom Product
Out of stock
Only %1 left
SKU
P70051

New Face Slot technology on the heel and toe of the irons provide uniform flexation across the face at impact, generating higher ball speeds and protecting distance even on off-center hits. Combined with the successful Speed Pocket Technology in the sole of the irons, the RSi 1's are fast, long, and extremely forgiving, culminating in high MOI playability and impressive performance.

Much like the two other RSi Irons I tested, the RSi 1 incorporates the same Face-Slot Technology, Speed Pocket, and Thru-Slot Technology for improved mishits. An Advanced Face-Design producing a thin face with a deep undercut, combined with the Inverted Cone Technology promotes maximum face speed and consistency. This is the most forgiving version of the 3 different RSi offerings.

I’ve owned a set of these since Aug. 2014, played rounds with this set here and there. Looking down at the RSI 1s, I do not see much difference between them and my Burner 2.0 heads, other than the Face-Slots and a high-polished finish. Looks-wise, Taylormade has been very consistent with their Game Improvement irons over the years. However, they are also constantly pushing the limits to increase ball speed, launch angle, distance, and playability, and the RSI 1s are a great example of that. Personally, I liked both the TPs and 2s better than the 1s, even though I am used to the looks of the 1s. I found a much better overall feel from the TPs and 2s with similar results. There is a bit of a “click” to the RSI 1s that I did not experience with the other two. I prefer the softer finish of the other two RSi offerings compared to the high polished look of the RSI 1.