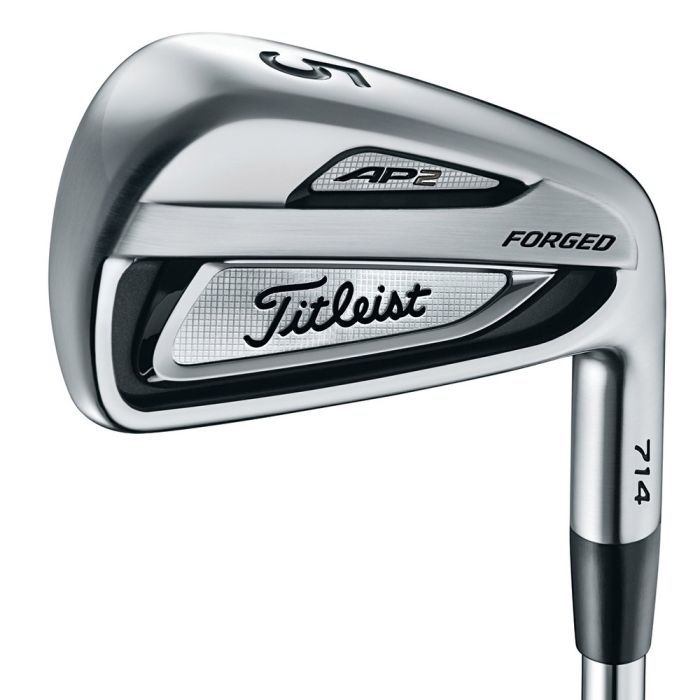 
Unveiled recently to Tour Pros at Congressional Country Club, the highly awaited and anxiously anticipated Titleist 714 AP2 irons are now being released outside the pro circuit. Completely updated, the new 714 AP2 irons are loaded with new elements and substantial design updates that dramatically enhance the clubs' flight, feel and forgiveness.

The new co-forged 714 AP2 irons feature a constant blade length throughout the set. Unlike the 714 AP1 irons that feature longer blade lengths in the lower-lofted clubs, each of the 714 AP2 irons has the same length from heel to toe. "Because we don't have the blade length or the size of the AP1, we have to get even more creative to make the AP2 more forgiving," said Chris McGinley, Titleist's vice president of marketing.

To meet that creativity, Titleist designed the new 714 AP2 long irons (3-5) with faces that are 25 percent thinner than their predecessors, along with a dual-cavity design. Within the encased lower cavity of the 714 AP2, Titleist positioned a high-density tungsten weight. Another piece of high-density tungsten also was co-forged in the heel section, just below the area where the shaft enters the hosel. The combination of the 714 AP2's thin face, perimeter weighting and lowered CG is designed to make these irons easier to hit and help mis-hit shots maintain ball speed. The larger-headed 714 AP1 irons are more forgiving, but the AP2 long irons provide some margin for error for accomplished players who want to shape the ball around a corner, hit it under a branch or feather a shot into a tight hole location.

Also, the lofts in the 714 AP2 short irons (6-GW) have been strengthened by 1 degree. The center of gravity also gradually rises in progression from long irons to short irons. According to Titleist, combining the stronger lofts and higher CG with slightly thicker face designs and narrowed soles should make it easier to manage the spin and trajectory of the 714 AP2's scoring clubs. Titleist then went on and added camber to the soles and gave the leading edges a "pre-worn" treatment that makes them less likely to dig in order to work more effectively through the turf.

All these new enhancements in the latest 714 AP2 co-forged irons, along with aesthetic updates to include toplines that have been lowered slightly, a smoother area where the hosel blends into the face, and a new finish combining satin and mirrored chrome make the new generation 714 forged AP2 irons competitively one of the best of the best in the current forged irons market and a set sure to match your playability while increasing performance.

The Titleist 714 AP2 irons have a progressive weighting to them, like many other players CB heads. The AP2’s progressive weighting comes from face thickness and sole weighting, which changes the CG from long to short irons. This shift in CG provides higher launching long irons, and flatter launching short irons. Increased playability also comes from tungsten weights in two separate parts of the head’s cavity, increasing MOI and giving players better distance control.

The 714 AP2’s have more of a players head look to it than the other CB players heads. The thinner sole, rounded toe area that squares off, and the less offset look really makes these heads look sweet! These heads are used by current Masters Champion Jordan Speith, but have the forgiveness to be played by those with a mid-low cap or better. This was the only head that I tried with a DGS300 shaft, so personally, I did not see the best results from these heads. The ball flight was low as expected, but feel was outstanding. The looks were top notch, definitely Titleist classy. There are some rumors going around the net that due to higher spin the overall distance is down for some with these heads. Down the line I am going to revisit these irons with a Launch Monitor to truly see for myself.