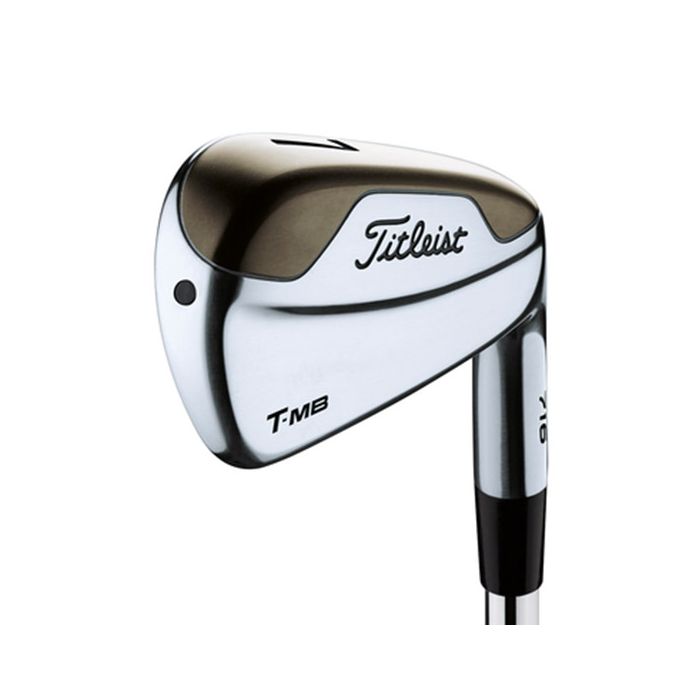 The New 716 T-MB is a long, forgiving, and technically innovative utility iron.
Manufacturer Direct
Custom Product
Out of stock
Only %1 left
SKU
P34623

A thin, fast face provides speed and launch for more distance. High density tungsten is used to position the center of gravity low and deep, allowing for a stronger loft. The result is high launch, low spin and more carry distance.

The muscle back frame with extreme tungsten weighting provides a powerful combination of forgiveness with high launch.

The brand new T-MB Irons are all about speed and launch from a thin, fast face for maximum distance. Titleist has placed high density tungsten weighting on the sole to create a center gravity that is low and deep on the clubface. This allows players to produce a stronger loft resulting in higher launch angles, lower spin and more carry. The muscle back and tungsten weighting also give these irons added forgiveness and higher ball speeds on off-center strikes.

The T-MB Irons are designed mainly for players that need help launching the ball higher and carrying longer distances. Many players may choose to combine the long irons (2-5) with another version of Titleist irons, while others will go for the whole set. In either case, these players prefer the look of blades but want or need more forgiveness.

Combined with the True Temper Dynamic Gold ATM shaft, the T-MB Irons really excel in the 2-5 Irons. Testing the 6 iron also proved to me that this version can also be played throughout the entire set. I found this head to produce a nice consistent flight with an excellent solid feel. One of the easier irons that I have hit this year without a doubt! I loved the looks and really enjoyed the two tone Colorway with a Dark Gray/Black sole. The Dynamic Gold ATM shafts really make the long irons elevate quickly and land softly. Another benefit being they are easier to swing as the shaft gets lighter the lower the number, while also producing more launch with the lower number irons. The T-MB irons offer a great combination of feel and forgiveness in those somewhat hard to hit long irons.